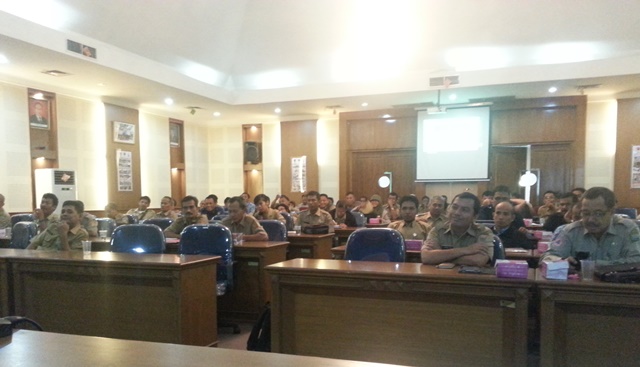 Australia Indonesia Facility for Disaster Reduction (AIFDR) and Humanitarian OpenStreetMap Team (HOT) Indonesia recently were invited to speak on “Coordination Meeting and Socialization of Disaster Contingency Planning Development using InaSAFE program” being held by Regional Disaster Management Agency (BPBD) of Central Java province. This event was held on Monday, November 18th, 2013 in Building A BPBD Central Java and attended by the BPBD representatives from 35 districts/cities in Central Java province. The goal of this event is to give an overview of AIFDR activities in Indonesia and as an introduction to Indonesia Scenario Assessment for Emergencies (InaSAFE) application. The event was started with opening remark from BPBD Central Java representatives, Temmy Purboyono. It is the continued with the presentation of AIFDR works in Indonesia by Henry Pirade, Capacity Development Support Program (CDSP) Program Manager. Yantisa Akhadi from HOT then present InaSAFE introduction, its components, how it works and also case study of InaSAFE implementation in several provinces and districts/cities in Indonesia. On the second session, the focus was on OpenStreetMap (OSM) introduction, how quality being guaranteed in OSM, and how to utilize it in humanitarian and social perspective. On QA session, one participant ask the possibilitu to use InaSAFE for landslide. Another participant ask whether there are specific requirement of computer to run InaSAFE application. The answer from the resource person is that currently InaSAFE cannot be used for landslide, but this feature will be incorporated in the next version of InaSAFE. While for requirement, there is no specific requirement, since InaSAFE can be run on regular laptop or on a PC.