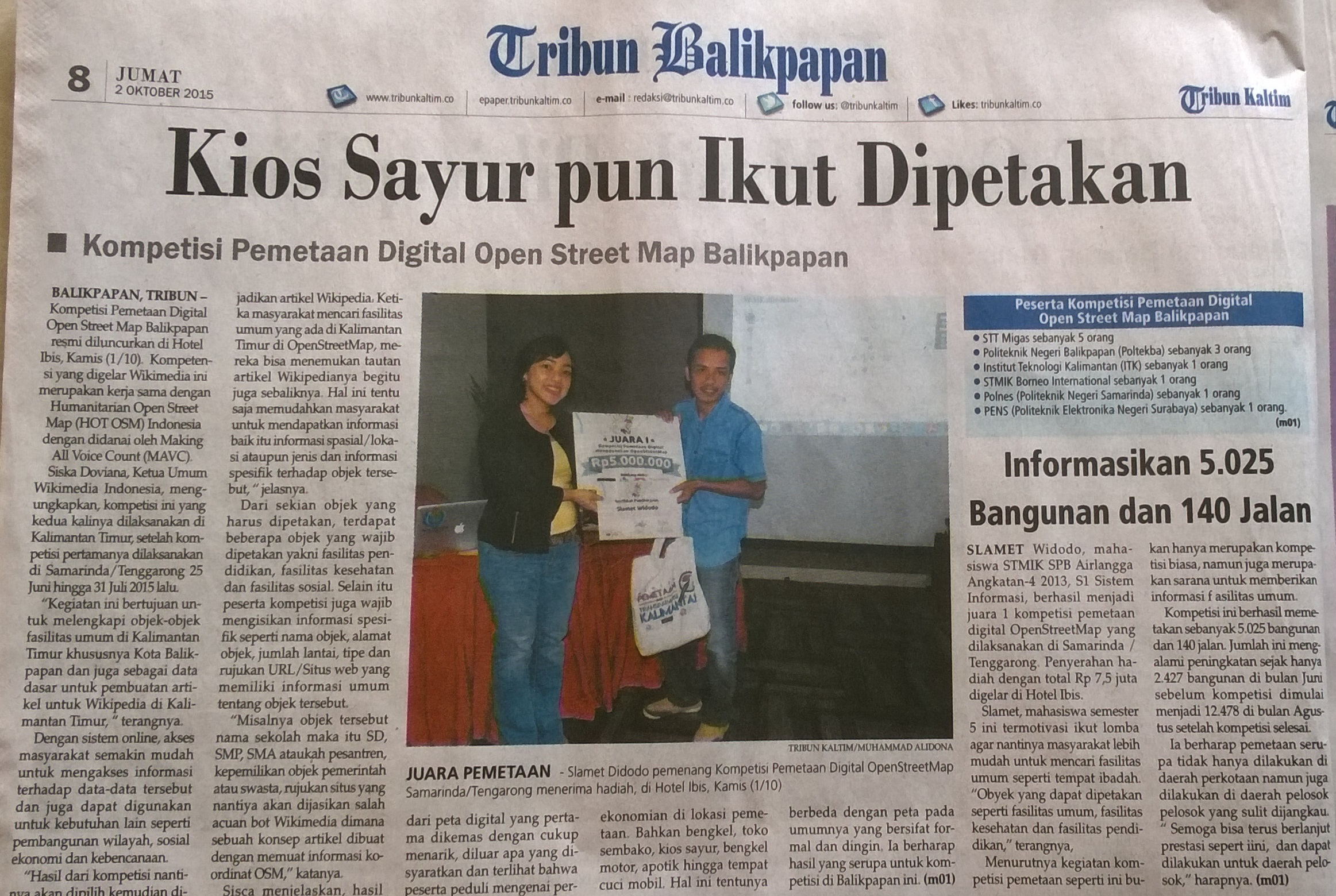 As a follow-up of previous OSM Training in Samarinda, Balikpapan was selected as next city where Digital Mapping using OSM Training in East Kalimantan which will be held as part of Open Content Project in Kalimantan. This training was held from October 1st until October 3rd 2015.

Award ceremony to the winners of OSM Mapping Competition in Samarinda started at 1 pm (local time) and the prizes were given by Siska Doviana as Head of Board of Executive of Wikimedia Indonesia. The prizes for winners were some cash and souvenirs. All participants who followed the competition until the end also were given certificate and represented by the winners. In additon to award and closing OSM Mapping Competition ceremony,  HOT and Wikimedia Indonesia invited all local reporter to see the OSM Competition closing ceremony and OSM Training in Balikpapan. In the following day, 2 newspapers put this activity into their pages. They are Tribun Balikpapan and Metrotvnews.com One of News about OSM Mapping Competition in local newspaper

After the award presentation and closing ceremony of OpenStreetMap Mapping Competition in Samarinda, they resumed OpenStreetMap Training activity in Balikpapan. The training itself was attended by 12 students from STMIK Borneo International Oil and Gas, STT Balikpapan, Kalimantan Institute of Technology and Polytechnic of Balikpapan.

Simillar with training in Samarinda, this training held for 3 days where participants were taught materials related about OSM include collecting data on the field in the second day (October 2, 2015) for almost a full day of survey. Survey location taking place around Balikpapan City. In addition, they are also taught to incorporate data of their survey results into OpenStreetMap. Usually during OpenStreetMap training, trainers who lead the training came from HOT Indonesia. However, in this OSM Training in Balikpapan, the trainers came from local volunteers, and also alumni of the previous OSM training in Samarinda and member of Wikimedia Indonesia. They were Suyono Darul and Arief Rahman. That was the interesting thing from this training. Another good thing that we can take from this training was OpenStreetMap community development in East Kalimantan are already well underway. This certainly is a positive example that could inspire the community and OpenStreetMap users in other areas to do the same thing.

This training activity was welcomed by the participants. They seemed quite serious but relaxed in participating this activity. The materials also taughted relatively easy to be understood. Participants were given an OSM guide as manual contains all the material that was taught during the training. You can get the guide here.

The training closed with photo session with trainers and participants. Wait for our next OSM activity in Kalimantan. See You! Photo session with trainers and participants of OSM Training in Balikpapan