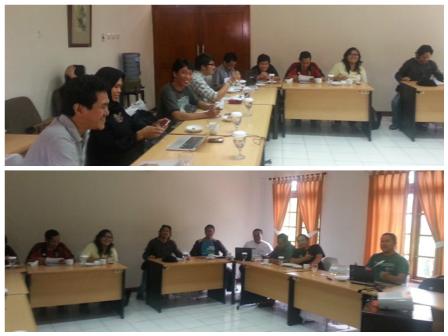 As part of In-depth Environmental Issues Writing workshop, Humanitarian OpenStreetMap Team (HOT) was asked to speak on matters related to OpenStreetMap (OSM). This event was held on Monday, October 28th, 2013. Located in Wisma PGI, Jakarta, the event was attended by Mongabay Indonesia Director, senior editor and 10 contributors which come from various regions in Indonesia. The participants from Mongabay Indonesia

The event was started by opening speech from Ridzki Sigit, Director of Mongabay Indonesia, then followed by introduction from Yantisa Akhadi as resource person from HOT. In his presentation, Yantisa explained what is OSM, how quality assurance and privacy were done in OSM and also comparison with other online map provider. Since participants background are environmental journalist, various methods on how to add OSM map into an article also discussed. Methodologies to contribute in OSM also presented.

There are several questions from participants such as how to add data into OSM if the region being mapped still empty and what if there are differences between data from government agencies, private sector and field data.