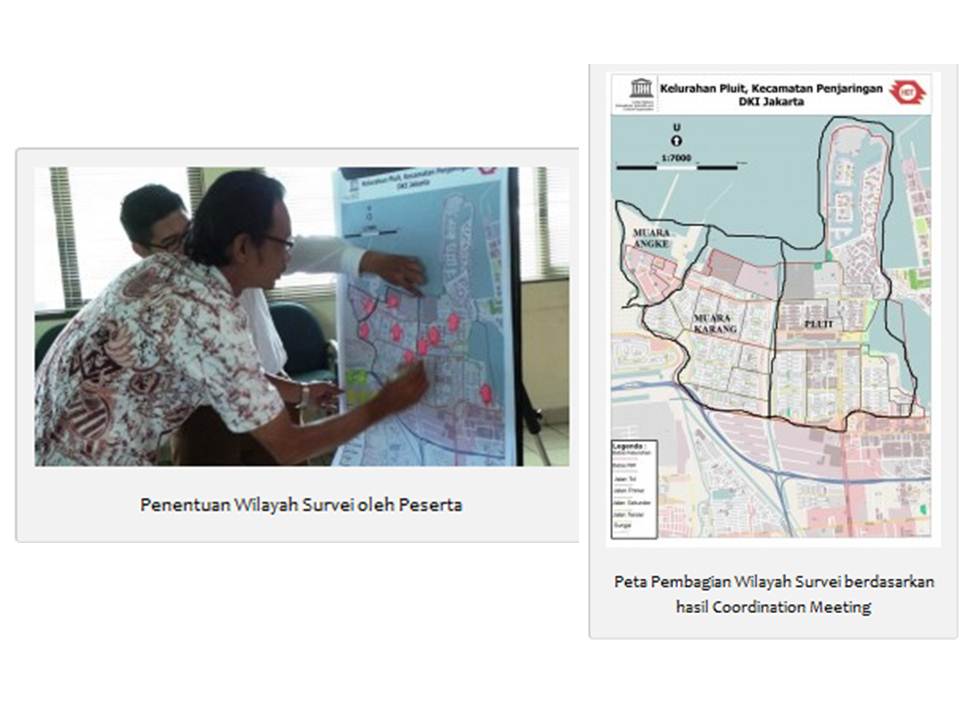 Jakarta is the capital city of Indonesia and also the largest city in Indonesia. It is home to more than 10 million people with a wide range and complex problems that plagued the city. One issue that always plagued Jakarta is flood. The last flood hits Jakarta occurred in January 2013, where nearly 50% percent of the population affected by the flood and resulted in 12 deaths. It is calculated that the loss is up to 20 trillion rupiah.

From these problem the Humanitarian OpenStreetMap Team (HOT) Indonesia in cooperation with UNESCO held a Point of Interest (POI) establishment training in Pluit Village which aims to gather important information related to flood such as shelter, public kitchen, evacuation routes, logistics posts and other community-based objects to increase public awareness of the area to minimize the impact and damage caused by flood.

Before the training, Coordination Meeting was held on September 18th, 2013 with HOT, UNESCO, Pluit Village and the participants. The participants consist of representatives from each RW, Karang Taruna and municipal police in Pluit Village. In this event we agreed about training dates, implementation of field survey, division of the survey area and field survey group.

From Coordination Meeting it is decided that the training is divided into 2 session : Introduction of POI and OpenStreetMap (OSM), on September 25th, 2013 and data input session on October 2nd, 2013. For the field survey, there are 3 areas, Muara Karang, Pluit and Muara Angke. Training begins with UNESCO and POI introduction session by Ms. Nina Marlena as UNESCO representative and after that the introduction of HOT and OSM. Next it was followed by GPS and Field Papers materials. On GPS and Field Papers materials, the participants also did short practice around the Pluit village office as well as a “warm up” before they collect POI in field survey. The last material is Introduction of Photovoice and CrowdMap. After the 1st training, participants were collecting POI in their respective territories. As for the type of POI to be taken consist of: The third day of POI Collection Survey was held in Sunday, September 29th, 2013 in Muara Angke. The participants are consist of 4 groups of representative from RW and Karang Taruna. Muara Angke area consist of 4 RW. These RW are RW 01, 11, 20 dan 21. After collecting all data in the field, participants inputted their data which is collected through GPS and Field Papers into OSM and CrowdMap. The materials in this training focuses on how to input POI data into OSM using Java OpenStreetMap Aplication (JOSM) and CrowdMap. After the participants inputted their data, the last session in this training is the closing ceremony by Secretary of Pluit village as a representative from Pluit village office. Screenshot of survey data in CrowdMap

You can see the POI Collection at Pluit Village  here and for the pictures that have been taken in Crowdmap you can access it at http://openstreetmap.id/banjirpluit/