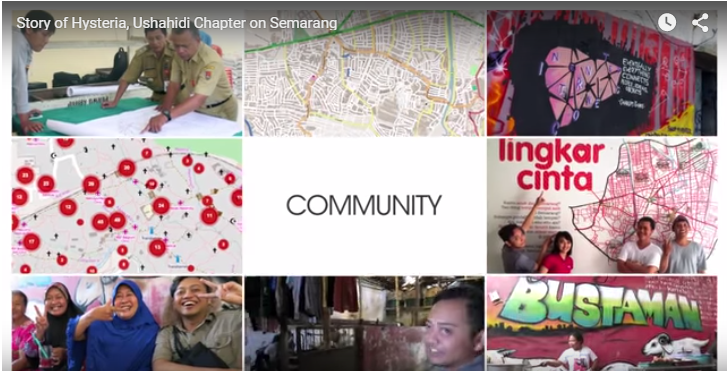 Today we’re excited to release this video that highlights Ushahidi’s work in Indonesia and how we’re finding resilience in unexpected places; using the convening power of open data to connect citizens to city government; and how we are part of a movement to nurture local tech ecosystems.

Ushahidi’s first tools were created by Kenyans who needed a quick, easy, way to collect reports about the post-election violence that wracked the country in 2007 and share information in the face of an information black-out. We built software to meet our own needs: the need to tell the story – the many stories – that were unfolding, spreading, exploding in an informational vacuum. We began as technology users who focused on making our own communities more resilient.

While we continue to create technology that changes information flows, we have also begun programs that help other communities to replicate the process we went through. Technology and data are only pieces of a larger puzzle that includes training, highly local cultural practices and forms of decision-making, and advocacy strategies to connect with decision makers.

For the last year the Rockefeller Foundation has been funding our work with a community-based organization in Semarang, Indonesia called “Hysteria.” As an artists’ collective they have not historically been seen as producers of information or geographic data that city officials can use but, as this video demonstrates: they are doing just that. Through this process we have also completed:

This will allow other community-based organizations in Indonesia to more easily access and customize Ushahidi for their needs.

Similar investments in training local organizations to use open-source software has shown enormous benefits. Kathmandu Living Labs, established with support from the Global Facility for Disaster Reduction and Recovery, showed phenomenal resilience in the wake of the earthquake in Nepal this year and their deployment of Ushahidi became the de-facto source for citizen-generated reports relating to relief efforts. Rockefeller Foundation is benefitting from and contributing to this community of practice through its support of the Resilience Network Initiative’s work, leveraging open-source technology and local capacity to create open data for improved resilience.

By highlighting this work, we can bring legitimacy to community organizations such as Hysteria, who are taking a leading role to improve their city’s resilience. This story also charts a new direction for Ushahidi: we want focus more on working together with communities to create, design, and implement technology to bring about the change they want to see.