Mapathon for InAWARE Jakarta Mapping Project with the University of Indonesia

The Humanitarian OpenStreetMap Team (HOT) Indonesia hosts a mapathon with students from the University of Indonesia’s (UI) Department of Geography. UI, one of Indonesia’s leading universities, has been among HOT Indonesia’s academic partners in carrying out projects involving youths and academia.

A mapathon, or a mapping party, is one of the most time-efficient methods of creating geospatial map data, through the digitization of building footprints from satellite imagery. Participants sit together for a given time and map assigned areas using the Tasking Manager, a tool that can be used to coordinate a collaborative, remote mapping effort. In several cases, as in the UI mapathon, the event was designed as a mapping competition among students, where top mappers are awarded with a prize and recognition. The UI mapathon event ran for three days, from 5 to 7 June 2017.

This project is part of the development program of InAWARE, a disaster management tool, to improve overall risk assessment, early-warning, and disaster-management decision making in Indonesia with support from the USAID, Office of U.S. Foreign Disaster Assistance (OFDA), as a funded program together with the University of Hawaii: Pacific Disaster Centre (PDC) and the Massachusetts Institute of Technology (MIT): PetaBencana to support the Government of Indonesia: Badan Nasional Penanggulangan Bencana (BNPB), and Badan Penanggulangan Bencana Daerah (BPBD) DKI Jakarta and Jawa Timur. 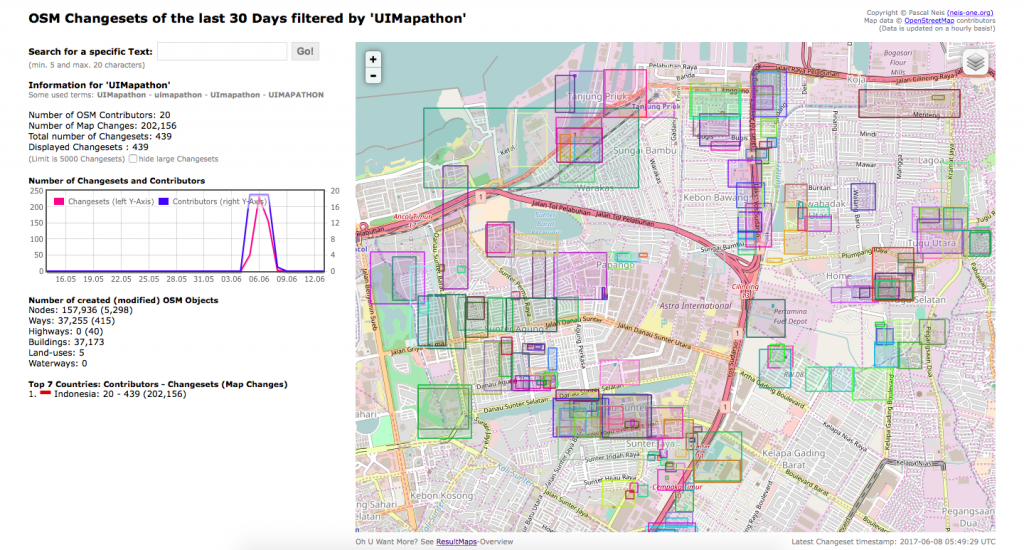 To equip students with quality mapping skills, the UI Mapathon was complemented with short modules on beginner up to intermediate mapping techniques using JOSM and the Tasking Manager. Students were then divided into 5 groups to map the following villages:

The five villages are some of the InAWARE mapping priority areas for June and July.

Students were able to map 37,173 buildings. Anggoro Tri Muldiguno was named the top mapper as he traced up to 4,613 building footprints. Anggoro and the contributions of other students not only help fill the gaps with the ongoing InAWARE project to be validated by HOT’s Data Entry and Quality Assurance specialists through field data collection and survey, but also raise overall awareness of OSM and the efforts towards disaster risk reduction in Indonesia.

The following is a video footage from #UIMapathon.