As the city-wide mapping project in Surabaya is nearing completion, Humanitarian OpenStreetMap Team (HOT) Indonesia reflects on some of its key achievements and lessons’ learned. HOT also evaluates on the bottlenecks and challenges in order to further improve its work as it moves forward to conduct another round of comprehensive city-wide mapping in Indonesia’s capital and most complex city, Jakarta. This mapping project is dedicated to enrich key lifeline infrastructures data, including buildings and road networks to provide exposure data for InAWARE: Disaster Management Early Warning and Decision Support Capacity Enhancement in Indonesia. This project is a USAID, Office of U.S. Foreign Disaster Assistance (OFDA) funded program supported by the University of Hawaii: Pacific Disaster Centre (PDC) and the Massachusetts Institute of Technology (MIT): PetaBencana to support the Government of Indonesia: Badan Nasional Penanggulangan Bencana (BNPB).

Surabaya consists of 31 subdistricts, 154 villages and 1,302 community groups. Being the second most populated city in Indonesia, mapping infrastructures–from health and emergency services to transportation and sport facilities–requires a systematic and concerted effort, ensuring all areas are covered and that all the data gathered is validated. The methodology used to capture data, includes consulting with local authorities and importing existing datasets, mapping remotely, mapathon trainings in collaboration with local universities, and in-field surveying data collection. 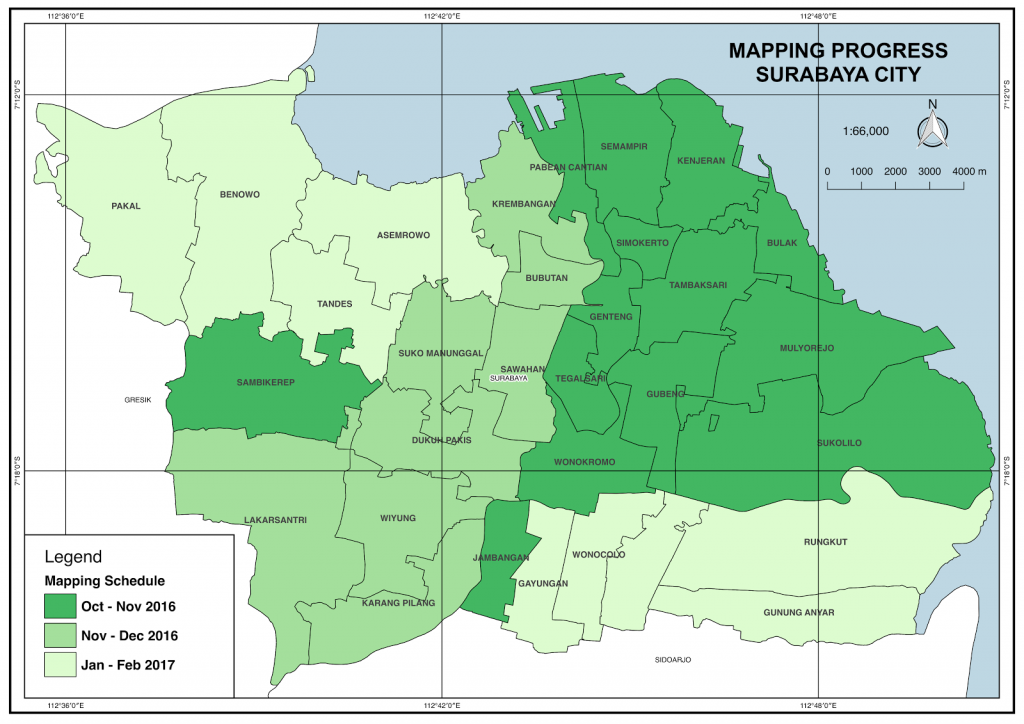 A thorough mapping of a 350.54 km² widht area is not an easy job. Dense settlements, difficulties with surveying permits, low resolution imagery, inaccurate GPS points, the rainy season, ambiguity in road classifications and overlapping boundaries are among the challenges highlighted by the HOT data entry and quality assurance specialists. Moving forward, the team aims to settle the surveying permit, clarify Indonesian road classification further, and attain high resolution imagery from USAID GeoCenter ahead of time to help identify areas of dense settlements that may require high resolution drone imagery. HOT will also recruit additional local staff (two data entry and one quality assurance specialist) and equip them with necessary surveying and data management skills to cover Jakarta’s 44 subdistricts and 267 villages. 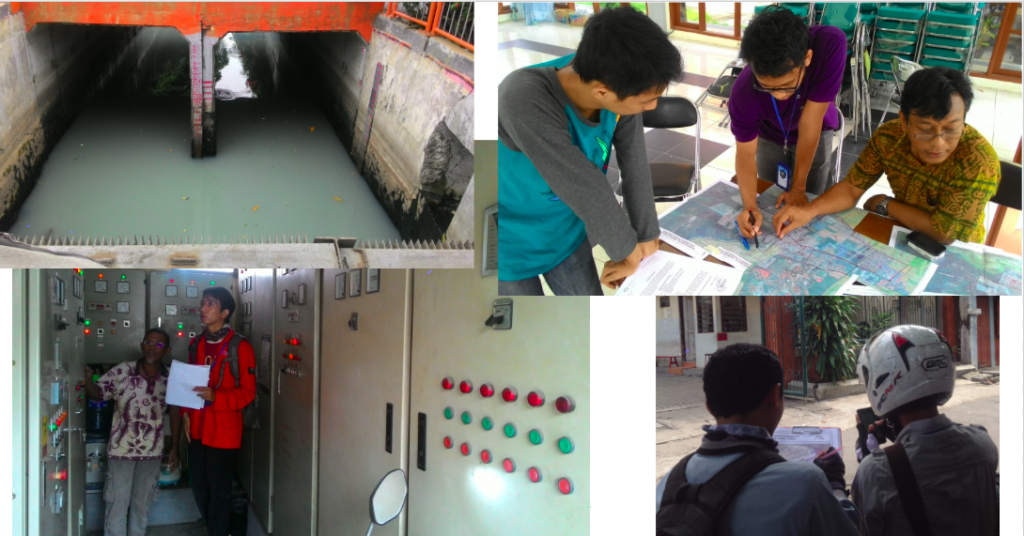 Despite the aforementioned challenges, the team accomplished remarkable results! Over 4,417 building data and 3,073,332.51 m roads were added to OpenStreetMap for Surabaya in just about 3 months. The data collection methodology–using OpenMapKit and GeoDataCollect (GDC)–as well as the team’s structure and assignments systematically spread over the districts can potentially become a best practice model to be replicated for future city-wide mapping projects, not only in Indonesia but in other countries with similar local context and predicaments, such as this. The following is the breakdown of mapped facilities and road network: 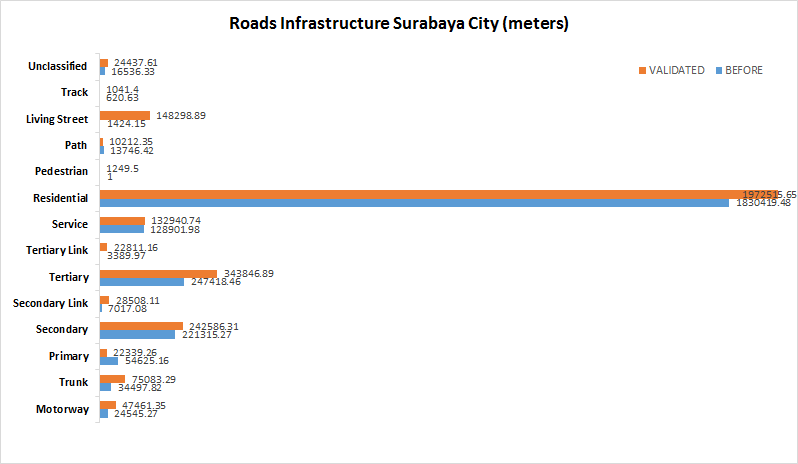 As well as measuring the quantity of data generated by the mapping efforts of the project, a key part of the project is ensuring that the quality of the data in OSM for our target cities also increases and improves. A straightforward method of comparing the number of features against the number of errors and warnings identified by the JOSM validation tool was applied to measure the change in quality. Using the administrative boundaries of the villages in Surabaya, a download of the OSM data from before the start of the project is then compared to a download of data after the mapping was complete. The following are some samples of comparison, the percentage of warning before and after the project decreases drastically:

There are still several warnings appearing from the data, although there is a visible decrease which is linked to the way that roads are labelled in Indonesia. The JOSM validation tool highlighted that there are too many streets with similar names, which is common as they only differ with increasing numbers such as Jalan Keputih 1, Jalan Keputih 2, Jalan Keputih 3, et cetera.

Here is a sample of the before-and-after administrative boundaries in one of Surabaya’s subdistricts, Genteng. The new boundaries were mapped out by sitting down with individual village leaders who graciously assisted in identifying the current extent of villages and cmmunity groups. 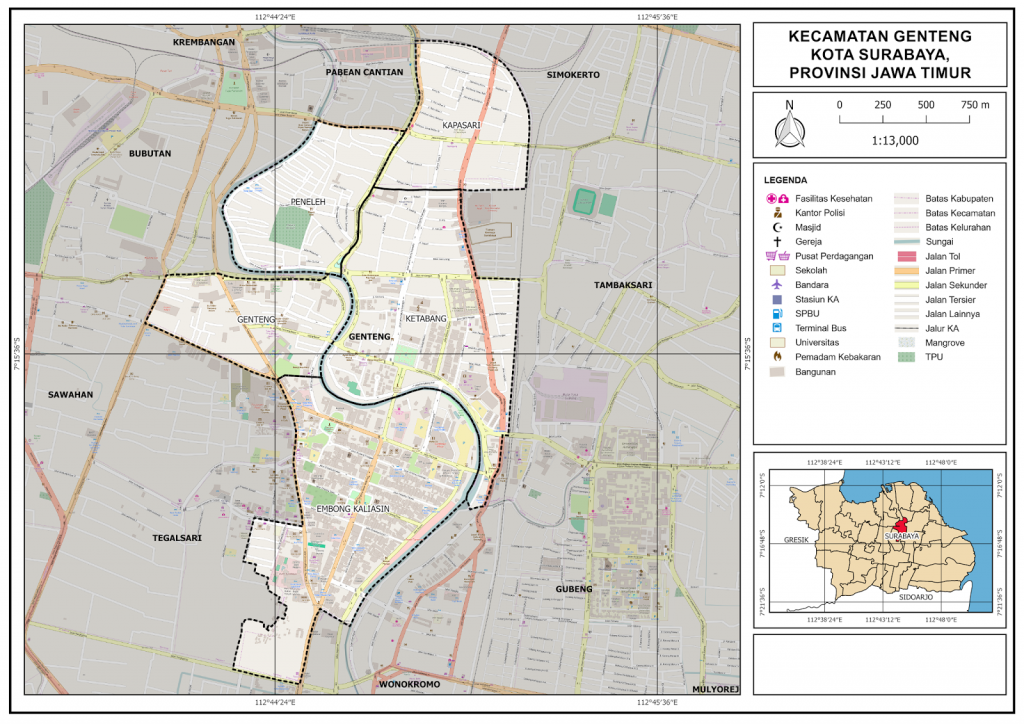 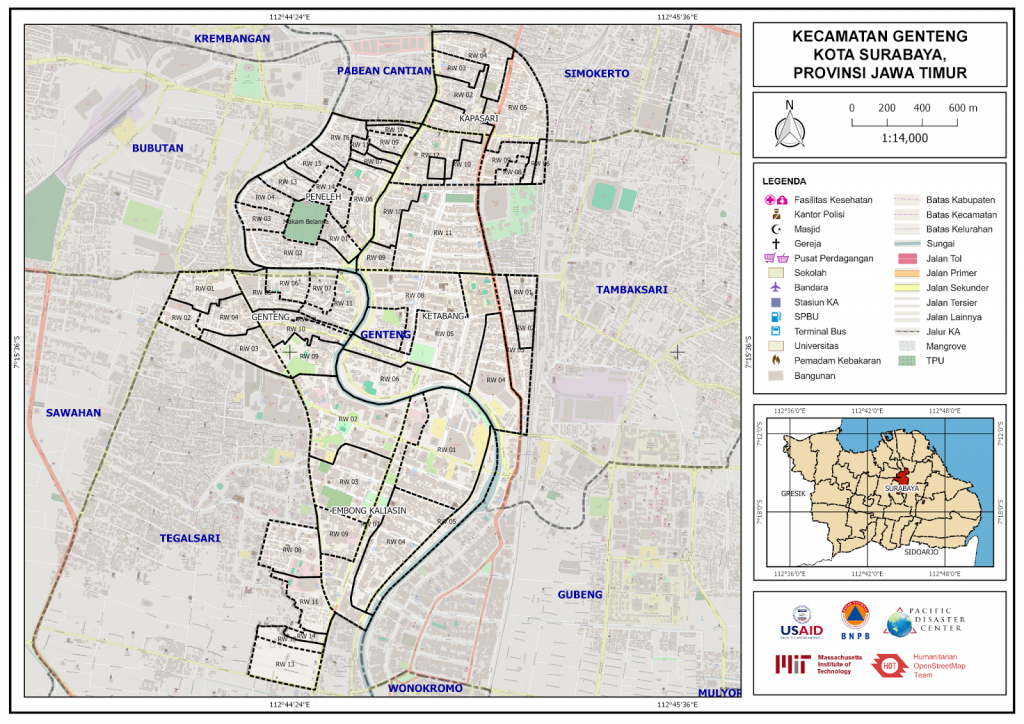 The collected OSM data will be used by Indonesia’s Disaster Management Agency, BNPB, as well as its subnational agencies BPBD DKI Jakarta and East Java to enhance its real-time early warning and decision making support with the use of InAWARE. In addition, OpenStreetMap and its exposure data provides the base map for Peta Bencana for a crowdsourced flood information using social media and instant messaging apps. The team will also be handing out printed maps later this week to each of the subdistrict and village offices as a token of appreciation for their collaborative efforts in adding their invaluable local knowledge. See a video footage of Surabaya’s mapping challenges and key results here.