A Story From State of The Map Philippines 2013 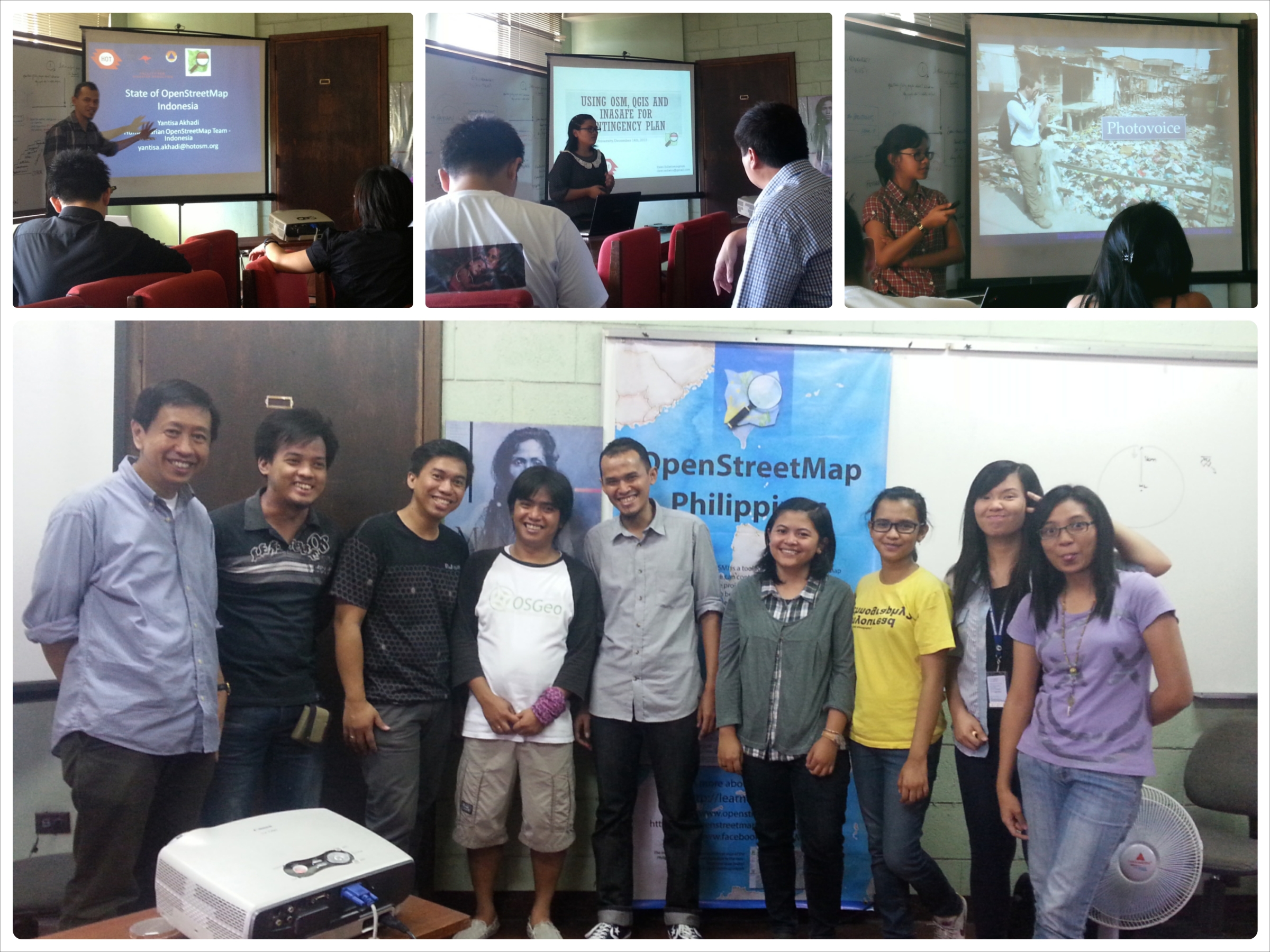 In 2013, the growth of volunteers and OpenStreetMap (OSM) data in Philippines are significantly increasing. Based on that, Philippines OSM community having initiative to conduct an event where they can share stories, experiences, and various mapping techniques that they have done through OSM. The event is open for public. Three members from Humanitarian OpenStreetMap Team (HOT) Indonesia had the experience to join the event called State of The Map (SoTM) Philippines held in Quezon City, Manila. This event was held on 14th and 15th of December, 2013.

The 2013 SoTM Philippines conference was held in Environmental Science for Social Change (ESSC) building, Manila Observatory, Ateneo de Manila University. One of the most active people in OSM Philippines is Maning Sambale. He is one of the initiators for the event and then supported by positive response from OSM Philippines community. In this event, the community would like to share their stories and experiences on OSM development and also share various OSM mapping techniques, especially related to Typhoon Haiyan which just struck Philippines recently (for more volunteers activities using OSM as part of Typhoon Haiyan emergency response can be accessed at http://wiki.openstreetmap.org/wiki/Typhoon_Haiyan_(2013)). The main topic of on the first day of SoTM Philippines are the development of OSM in Philippines and other countries in Asia, including OSM in Indonesia. The participants are university students, OSM volunteers from various countries, and representatives from Philippines government institution. The topic discussed on the first day also covers the use of OSM in education, OSM development in Web-based GIS, also the use of OSM, Quantum GIS (QGIS) and InaSAFE in disaster management, both in Indonesia and Philippines.

Ninoy Castro from Department of Social Welfare and Development Philippines presented the use of Web-GIS in emergency response, such as earthquake, typhoon and social conflict. Miguel Macariola presented the project from Department of Education Philippines on mapping schools and its facilities in the country. This Web GIS contains school and its facilities data to ease government in distributing important facilities such as computers and internet to those who have not owned it. He call the participants to contribute in mapping Philippines, with special focus on schools.

OSM Philipines also actively held trainings on OSM, QGIS and InaSAFE in various regions. One of its trainer is Dianne Bencito, she is young programmer from ESSC who contribute in customizing InaSAFE to adapt to the need in Philippines. She share her experiences in learning Python programming language and using GitHub to develop InaSAFE in Philippines. Another trainer from OSM Philippines is Faye Andal. She share her stories in ESSC project in partnership with Department of the Interior and Local Government (DILG), World Bank, AusAID and OSM. This project combines participatory mapping and Local Government Unit (LGU) decision support tools for disaster risk reduction in Pampanga.

HOT Indonesia also share their activities in Indonesia. Yantisa Akhadi gives the overview of how OSM being implemented in Indonesia from 2011 up until now. Dewi Sulistioningrum presented the use of OSM, QGIS and InaSAFE in Bengawan Solo, DKI Jakarta and Makassar flood contingency planning. While Vasanthi Hargyono presented the combination of OSM mapping techniques using Photovoice method to develop a crowdmap (based on Ushahidi platform) which contains Point of Interest (PoI) along with photographs and information related to floods.

On the Lighting Talk session, Eugene Alvin Villar explained how to improve OSM data quality using validation tools available in Java OpenStreetMap Editor (JOSM), Keepright and OSM Inspector. While Maning Sambale share his stories in using various GPS tools to map various regions in Philippines especially those with limited satellite imagery and presented using MapBox. The first day of the conferences was closed by having a dinner at Bonfire Restaurat, Riverbank Mall. Various sessions and presentations in the event

Second day event was filled with workshops and discussions. The first workshop started with presentation from Taichi Furuhashi (OSM Japan), who share the development of OSM in Japan since 2008 up until now where it has reached 4000 OSM users in Japan. There are various activites held by OSM Foundation Japan such as Hackathon and Mapping Party. One of its project is mapping Izu Oshima island which have been struck by landslide. They also launched crowdmap website on Ushahidi platform to help collect detailed information from the field. Various sophisticated tools such UAV drone and small helicopter also deployed to acquire detailed aerial photograph. HOT Indonesia slides also can be downloaded from:

Hopefully in the future, OSM Indonesia is able to do similar event so that we can share OSM mapping activities from OSM friends all over Indonesia :).